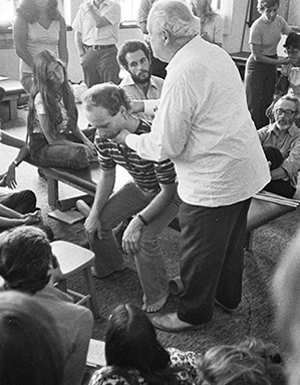 Feldenkrais. It is a method of movement re-education, named after the man who developed it, Moshe Feldenkrais.

Most of us are unaware of how we move. We pay attention to where we’re going or what we are doing, not to how we move. For example, think about how you stand up from sitting. How do you do it? What happens? What moves when?

It often seems as if people have gotten stuck doing a movement or holding themselves, unconsciously, in a certain way. For instance, if you injure your leg, you change how you walk and you begin to limp. The limp may be appropriate immediately after an injury, but it can last much longer than the injury. If it continues longer than it’s needed, it can lead directly to pain, stiffness, and other problems. But that’s just one example; you can limp with your shoulder, your neck, or your back. Indeed, you don’t have to injure yourself to develop this kind of movement. You can acquire a similar habit playing a musical instrument, repeating work movements day in and day out, playing certain sports, and so on. The key is that you develop a movement pattern you get stuck with, a pattern that underlies every movement and interferes with any activity that runs counter to it.

Feldenkrais isn’t about curing or fixing people. It isn’t a medical treatment, it’s an educational approach. It’s about helping people get control back into their lives by understanding why they feel the way they do and by learning how to move differently so that they don’t have to keep feeling that way. Even when people have an organic problem or disease, I can often help them deal with how they respond to the problem. For instance, when I work with people who have arthritis, my job isn’t to get rid of the disease. In this case, my job is to help them move so that they don’t stress the affected joints and so that they can find more comfortable, safer, ways to do what they want to do. Same thing applies to disc problems—even when there is a structural problem—the question is how can the person move in a better way, so that they increase their comfort and avoid or minimize future problems.

Register for an upcoming webinar on this topic with Dr. Mark Erickson, Body Awareness Training: The Missing Link in the Exercise Continuum. Dr. Erickson has been utilizing the Feldenkrais Method of body awareness training in his physical therapy practice for 35 years

Larry Goldfarb, Ph.D. is a movement scientist, certified Feldenkrais trainer, pioneering educator and author.
A practitioner for over thirty years, Larry has taught ATM in a wide range of contexts including rehabilitation, the arts, education, and on-the-job injury prevention. Larry directs teacher trainings and post-graduate courses, as well as mentorship programs in North America, Europe, and Australia. Beyond the illuminating models he developed to articulate the method behind the Feldenkrais method, making it easy to understand, Larry is highly regarded for his warm and personal teaching style. He maintains a private practice based in Santa Cruz, California.