Fuel to the fire, alcohol to estrogen..… Alcohol is a cause of breast cancer. There is no such thing as a little poison, poison in moderation. Poison is poison. As October is Breast Cancer Awareness Month – Let’s please be aware of the realities of alcohol – the studies on alcohol and breast cancer make it clear, alcohol is NOT our friend. One in eight women in the United States will get breast cancer.

All major cancer institutions agree – the 3 most influential lifestyle choices paramount to maintaining breast health are:

They are all important – being vigilant about 2, does not ease the burden of onus on the third. 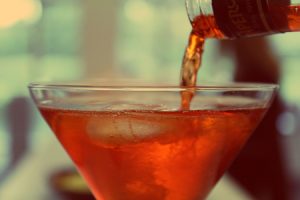 Women who are carriers of any of the inherited defective genes, BRCA, PALB2, HBOC… have a greater risk of developing breast cancer. Minimizing, even better eliminating alcohol would be an outstanding prophylactic choice. Alcohol is also associated with an increased risk of recurrence of breast cancer.

A few myths to dispel and annihilate immediately:

The National Toxicology Program of the US Department of Health and Human Services lists consumption of alcoholic beverages as a known human carcinogen. In 1988, the IARC (International Agency for Cancer Research) declared alcohol a carcinogen.

The fact is, alcohol is a contributing factor to all of our major illnesses…heart disease, at least 7 types of cancer, liver disease, obesity, mental health issues, immune dysfunction,  with inflammation being at the root cause. I feel compelled to mention here that heart disease kills more women each year than breast cancer, in fact, more women than all cancers combined.

According to the CDC, alcohol costs the United States each year:

In July 2016, New Zealand Public Health Physician and Epidemiologist Dr. Jennie Connor released an extensive study commissioned by the Center for Addiction. The study was a compilation of thousands of world wide meta analyses studying the relationship between alcohol and cancer. The conclusion was that alcohol causes cancer in at least 7 sites in the body. I have had the pleasure of interviewing Dr. Connor twice. Once on her own, and the second time with a panel of 3 other health professionals I assembled, discussing the many negative health effects of alcohol. The links to both interviews are located below:
http://bestinhealthradio.com/many-health-effects-alcohol
http://bestinhealthradio.com/alcohol-causes-cancer-doubt-protection-from-cvd

There are a number of ways in which it is thought that alcohol causes breast cancer. 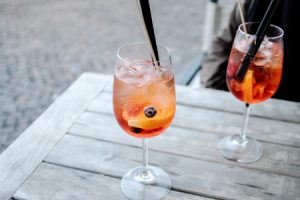 A glass of wine a day is not good for the heart. According to the Journal of Clinical Endocrinology and Metabolism, 500mg of Resveratrol (used as the rationalization that wine is healthy) are necessary to provide health benefits. A glass of red wine has 12.5mg of resveratrol. To meet the potential health benefits of resveratrol would require drinking 40 liters of wine per day. Older studies which tried to claim that a glass of wine a day was good for you have been dissected, proving what was thought as a benefit of the alcohol, has been attributed to other factors, not the alcohol. The scientific methods in these studies was painfully loose. I think we can all think of a number of heart smart activities!

The bottom line is: Alcohol is a carcinogen and increases our risk of cancer, especially breast cancer. It increases our risk of most chronic diseases. We can still engage in the many social aspects of drinking alcohol, we can substitute the alcohol with other choices…….save our money and our health!