In 2011, a 52-year-old runner and yoga enthusiast walked into the office of Monica Loghin, a neuro-oncologist at MD Anderson Cancer Center in Houston, complaining of numbness and weakness in her lower limbs and difficulty controlling her bladder.

The symptoms were of grave concern, as the patient had previously undergone surgery for breast cancer that had spread to her brain. If such a cancer returns post-surgery, that is often a sign the patient doesn’t have much time left. 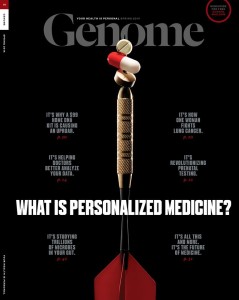 Article from the spring 2014 issue

An MRI confirmed that the breast cancer had again spread to the woman’s cerebrospinal fluid. Loghin ordered testing of that fluid to see if the patient might have certain biomarkers that could be targeted by existing drugs. (A biomarker is a DNA sequence or protein associated with the disease; different biomarkers can suggest specific treatments, depending on the disease and other factors.) She asked for tests that could detect tumor cells circulating in the blood.

The cancer cells in the fluid bathing the woman’s spinal cord and brain chambers did, in fact, have a lot of the protein that controls a glucose (sugar) transporter that drives cancer cells. The cancer cells in the fluid also had a lot of HER2, a protein associated with aggressive breast cancers but also treatable with a drug called Herceptin (trastuzumab). The drug is usually taken intravenously, but Loghin had heard of a couple of cases in which Herceptin was delivered directly into the cerebrospinal fluid via a flexible tube, or catheter. The patient agreed to this experimental treatment.

Genome Magazine‘s mission is to explore the world of personalized medicine and the genomic revolution that makes it possible, empowering you to make informed health decisions that will help you live better and longer.