We know how important it is to manage and control our body weight to remain at the recommended weight for our health. But did you know that if you’re a sedentary adult who weighed the same today compared to 10 years ago, could actually mean that you’ve gained fat mass? Physically inactive people can lose as much as 3% to 5% of their muscle mass each decade after the age 30. Even if you are active, you’ll still have some muscle loss. As a result, if your weight has remained the same for the past 10 years especially when you’re not physically active, you’ve probably lost muscle mass and gained fat mass instead. This progressive loss of muscle mass is called sarcopenia. 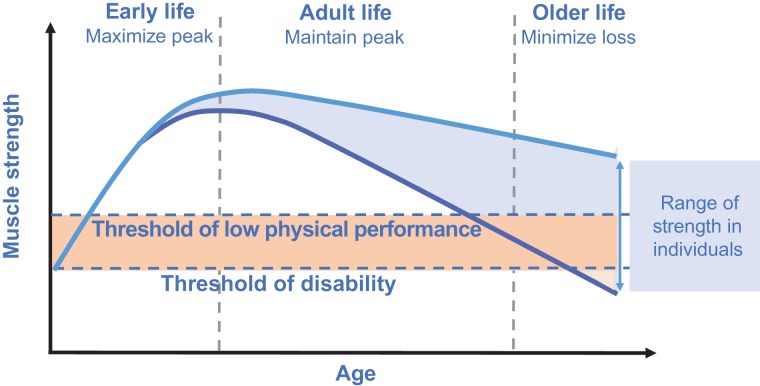 We know how important it is to manage and control our body weight to remain at the recommended weight for our health. But did you know that if you’re a sedentary adult who weighed the same today compared to 10 years ago, could actually mean that you’ve gained fat mass? Physically inactive people can lose as much as 3% to 5% of their muscle mass each decade after the age 30. Even if you are active, you’ll still have some muscle loss. As a result, if your weight has remained the same for the past 10 years especially when you’re not physically active, you’ve probably lost muscle mass and gained fat mass instead. This progressive loss of muscle mass is called sarcopenia.

Sarcopenia is a progressive and generalized skeletal muscle disorder that is associated with increased likelihood of adverse outcomes including falls, fractures, physical disability and mortality. Sarcopenia increases risk of falls and fractures; impairs ability to perform activities of daily living; is associated with cardiac and respiratory disease and cognitive impairment. It also leads to mobility disorders; and contributes to lowered quality of life, loss of independence or need for long-term care placement.

Other causes of sarcopenia.

As well as aging, other risk factors such as lifestyle behavior, malnutrition, diseases and preexisting/past injuries can also lead to muscle loss.

Measuring or testing for sarcopenia.

Measuring muscle mass may require the use of state-of-the-art machine such as MRI to accurately measure and calculate muscle mass. The process may be tedious and can be inaccessible for the general population. Fortunately, there are some simple and practical ways to help determine if someone is at risk of sarcopenia.

The simplest way to establish the possibility of sarcopenia is by asking the person to report signs or symptoms of sarcopenia such as falling, feeling weak, slow walking speed, difficulty rising from a chair, trouble lifting weights, weight loss or the appearance of muscle wasting.

Measuring grip strength is simple and inexpensive. Low grip strength is a powerful predictor of poor outcomes such as, increased functional limitations, poor health-related quality of life and death. Accurate measurement of grip strength requires use of a calibrated handheld dynamometer under well-defined test conditions with interpretive data from appropriate reference populations.

The chair stand test (also called chair rise test) can be used as a proxy for strength of leg muscles (quadriceps muscle group). The chair stand test measures the amount of time needed for a person to rise five times from a seated position without using his or her arms. The timed chair stand test is a variation that counts how many times he or she can rise and sit in the chair over a 30-second interval.

Muscle quantity can be reported as total body Skeletal Muscle Mass. Bioelectrical impedance analysis (BIA) is commonly used in a clinical setting and at fitness centers for estimation of total muscle mass. A BIA device is a special scale which is simple and convenient to use. BIA does not measure muscle mass directly, but derives an estimate of muscle mass based on whole-body electrical conductivity.

Gait speed is considered a quick, safe and highly reliable test for sarcopenia, and it is widely used in practice. Gait speed has been shown to predict adverse outcomes related to sarcopenia, disability, cognitive impairment, need for institutionalisation, falls and mortality. A commonly used gait speed test is called the 4-m usual walking speed test, with speed measured either manually with a stopwatch or instrumentally with an electronic device to measure gait timing.

Exercise is the most effective way to reverse sarcopenia. Nonetheless, there is a common misconception when it comes to exercise preference among older population. The elderly tend to shun the gym (perceived to suit the younger generation) in favor of walking or hiking as their main exercise. While aerobic-based activities such as walking and hiking is good for the heart, it is insufficient to counter muscle loss adequately.

Resistance training is best to increase muscle mass and strength. 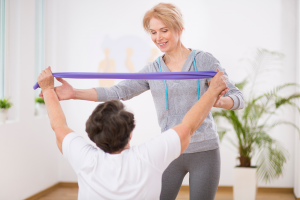 Some studies suggest that walking can also help prevent and even reverse sarcopenia. Besides, it’s an activity most people can do for free, anywhere they live. However, combining exercise programs specifically resistance training and walking can help minimize the effects of sarcopenia effectively.

The act of lifting weights alone does not induce muscle growth. The training load has to cause fatigue to stimulate the physiological mechanisms responsible for increasing muscle mass. This is why a well-designed, progressive resistance exercise training program is necessary to exert positive effects on both the nervous and muscular systems and, ultimately, results in profound enhancements in muscle mass and muscle strength. Thus, resistance exercise training should be considered a first-line treatment strategy for managing and preventing both sarcopenia.

When it comes to resistance training, the following principles are important for results:

Specificity: The body is only going to adapt to the demands that are placed on it. Muscular adaptations will not occur if a person is only performing cardiovascular training (and vice versa). For this reason, resistance exercise is highly recommended to combat muscle loss. The principle of specificity also means that in order to strengthen and build muscles at the leg, the resistance exercise must target the quads, glutes, hamstrings, calves and adductor/abductor.

Overload and Progression: Overload does not occur without progression. Overload simply refers to the fact that you will not see additional gains if you keep doing the same thing. For instance, if a person performs three sets of 10 biceps curls with 25 pounds for six months, he or she will be really good at lifting 25 pounds 10 times. However, that individual will never see any additional strength gains beyond what he or she has already made unless the weight or number of repetitions are increased. Progression refers to the step-by-step increases that are implemented to create that overload. The overload principle dictates that to stimulate physiological changes such as muscle growth, it is necessary to apply a physical stimulus at an intensity greater than the body is accustomed to receiving.

Reversibility: Simply put, “You don’t use it, you lose it”. Our bodies are always going to use the path of least resistance. So if there is something we’re no longer using, the body is not going to waste its energy maintaining it. For example, muscle mass takes a lot of energy to maintain. If we’re not using that muscle mass, the body is going to lose it, resulting to muscle waste.

The role of plyometrics.

A recent research in 2019 suggests that plyometric training significantly reduces the risk of age-related muscle loss, and relieves some of its associated negative effects such as loss of muscle tone, strength and function. They found that plyometric training resulted in increased muscle mass and power in both young and older men. Plyometric exercises are dynamic ballistic movements that is high-impact and explosive. Examples of plyometric exercises are jump squats, skipping rope, jumping jacks, slam balls and so forth. Other examples may also include sports that are fast and dynamic such as basketball, badminton, tennis, martial arts and football too. It is good news that aging muscle can respond quickly to plyometric training. Despite its benefits, due to its high-injury risk, appropriate strength, flexibility and good biomechanics are absolutely essential to avoid hurting yourself. It is extremely important to start off with low-intensity plyometric exercises to allow the musculoskeletal system to adapt before progressing to heavier loads. 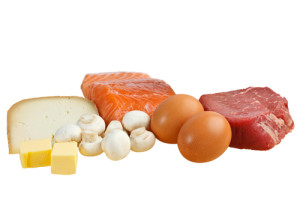 Including proper nutrition can optimize muscle growth and strength. Protein possesses essential building block called amino acids to maintain, repair and build muscle tissues. It is commonly found in animal products, though is also present in other sources, such as nuts and legumes. It is important to note that eating protein alone will not build muscle mass or strength. It has to be accompanied with resistance exercise to achieve the desired result.

The RDA (recommended daily allowance) for protein is 0.8 g of protein/kg of body weight per day for all adults. However, older adults have unique protein needs so protein recommendations for older people will vary. Thus, research shows the RDA may not be enough for older adults to gain and maintain muscle mass. In general, studies suggest that most people over 65 will benefit from taking about 1-1.3 g of protein/kg of body weight.

Vitamin D deficiency is related to sarcopenia, although the reasons why are not entirely understood.  Taking vitamin D supplements can increase muscle strength and reduce the risk of falling. Vitamin D supplemented with Calcium also helps prevent another onset of aging disease that is osteoporosis.

Consuming omega-3 fatty acids via cold water fish or supplements can increase your muscle growth.  A study of 45 women found that a daily 2-gram fish oil supplement combined with resistance training increased muscle strength more than resistance training without fish oil. Part of this benefit may be due to the anti-inflammatory benefits of omega-3 fatty acids. Furthermore, research has suggested that omega-3s might also signal muscle growth directly.

It is evident that having greater muscle mass with lower fat mass has a positive health effect for both male and female regardless of age. It also improves cognitive function, mental health and reduce the chances of developing osteoporosis. Moreover, having higher muscle mass directly translates to reduced risk of injury and becoming fitter to perform daily activities. A part from improved function, having greater muscle mass also enhances your physical appearance and body composition, in return boosts self-confidence and self-esteem.

Aim to routinely lift weights by adopting a carefully designed resistance training program for at least once or twice a week. The resistance training program should consist a mix of isolation exercises for muscle activation and conditioning, and compound movements which utilizes multiple joints to build muscle strength and mass. Remember, lifting weights at your golden years won’t hurt you when done correctly. Whenever in doubt, engage a qualified exercise professional to assist you with your goals.

Other muscle building activities that you can do at home includes heavy gardening, wood work, dancing and body weight exercises such as squats and push-ups. As always, move often and take things gradually. It is never too late to start!