One of the most expansive areas of study and treatment for Parkinson’s Disease (PD) lies in the various biological pathways associated with the disease progression. Of these pathways, the c-Jun N-terminal Kinase (JNK) pathway has received the spotlight for its integral role in disease pathology.

This pathway is deeply involved in cellular apoptosis and plays a vital role in many of the neurological processes that are effected by PD.[i]  A disease that is comprised of over a dozen pathologic targets, the multitude of roles played by JNK in the progression of the disease as described by neurological decline renders it a prime target for the treatment of PD and its associated pathology.[ii]

There are numerous ways to directly target the downregulation of the JNK pathway, ranging from lifestyle alterations to supplemental options.  JNK downregulation should be an integral component of any approach that seeks to do more than simply replace the loss of dopaminergic neurons through the use of L-dopa or other popular PD drugs.  The manipulation of this powerful biological pathway is a pillar in my polytherapeutic program designed to target PD and is currently being implemented on a long-time PD sufferer for evaluation.

To target this pathway one may utilize a very common name uttered among the holistic-minded practitioner: curcumin.  This component of curry spice has long been famous for its potency as an anti-inflammatory compound and often cited for its apoptosis-inducing effect on various cancer cells.  Less touted is that curcumin also directly targets the JNK pathway and results in its downregulation.[iii]  A reasonable mind could conclude that by downregulating this pathway, one would also expect an improvement in the various morbidities caused by its upregulation.

This assumption is an accurate one.  Demonstrated thoroughly and repeatedly in various animal models, curcumin’s inhibitory effect on the JNK pathway directly results in the protection of dopaminergic neurons.[iv]  This will not come as much of a surprise to those who commonly seek-out the alternative, traditional, or holistic options for any number of neurological disorders, yet somehow the almost bizarre effectiveness of curcumin is still not widely known.  Even in total isolation, curcumin provides definable, positive effects on the PD-afflicted brain.

The JNK pathway can also be directly effected in positive ways through lifestyle alterations. Intermittent fasting and caloric restriction have long been held as therapeutic lifestyle options, but one dietary measure that has gathered far too much dust on the shelves of holistic, traditional therapy is the ketogenic diet.  First used as a means to treat children suffering from seizures, a ketogenic diet has a long, proven history of being effectively applied to a variety of neurological issues.  Its successes as an anti-seizure protocol are astounding and nearly miraculous.[v]  Curtesy of the misinformation spread about some decades ago that erroneously painted dietary fat as the origin of all disease (or so it seemed), the ketogenic diet, arguably the most powerfully therapeutic and medical dietary program, was discarded. 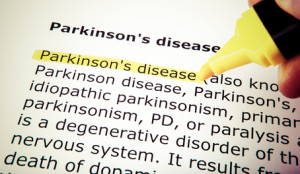 However, in the new dawn of nutrition that accepts and understands the numerous benefits of dietary fat, even saturated fat, the ketogenic diet may make a comeback.  Specifically to our new target, the JNK pathway, we can utilize a ketogenic diet to reduce the reactive oxygen species (ROS) in the body through an increase in antioxidant production in corpore[vi].  ROS are known to activate JNK pathways,[vii] and are therefore a strong candidate for target in PD.  By utilizing a ketogenic diet, a diet that has a rich history of application in neurological disorders and disease, we can also improve the body’s ability to rid itself of ROS and further downregulate JNK as a direct result.

Despite its irreducible complexity and immunity to monotherapies, Parkinson’s Disease lends itself to several exciting options for potential therapy.  As information concerning the nature of disease progression and even genesis becomes known and explored, it is not unfeasible to consider the hope and possibility of complete disease control and even regression, especially when the appropriate program is designed, implemented, and monitored.  The JNK pathway, integral in the progression of PD, can be targeted through a multitude of ways, including intelligent consumption and supplementation of curcumin, especially when combined with the therapeutic qualities of the ketogenic diet.  Outside of commonly-prescribed drugs, the continuing research on holistic and nutrition-based therapies for PD are very promising although large-scale studies and clinical research are still needed to fully substantiate these ideas, most especially human-based studies.  Until then, such therapies will be experimental and fringe to the detriment of PD sufferers.

Shane Caraway uses his education, experience, and credentials as a certified personal trainer and nutritionist to help others recapture the primitive mystique, strength, and beauty that their body is capable of.  His greatest pleasure comes from the successes of his clients, no matter how mundane or simple each small victory may be.  Always in pursuit of various techniques, compounds, nutrients, herbs, and other means to help support the body against disease, Shane finds the challenge of combating chronic disease to be the pinnacle of his work, especially with diseases and conditions that otherwise cause clients to surrender.  An amateur strongman, former MMA coach and fighter and self-defense instructor, the amazing world of nutrition and physical training has its hooks deep into his mind, resulting in his constant research, study, writing, and self-experimentation.  Plato’s words resonant deeply throughout the matrix of Shane’s mantra, Wellness & Strength: “Lack of activity destroys the good condition of every human being, while movement and methodical physical exercise save it and preserve it.”