A Marathon Runner Reveals how Running Helped him with Parkinson’s.

While there is currently no cure for Parkinson’s, studies show that exercise can be extremely beneficial.

Parkinson’s disease is a progressive, degenerative neurological disease, which as of today has no cure. Its main cause is that certain cells in the brain that  produce dopamine, (a neurotransmitter necessary for proper muscle reaction), are damaged for some reason. Therefore the amount of dopamine in the brain is not sufficient for the body to function properly.

There is no blood test that can diagnose Parkinson’s disease. It is diagnosed by a neurologist who analyzes motor functions. By the time it is diagnosed, 60% -80% of the cells required to produce dopamine are already not functioning. 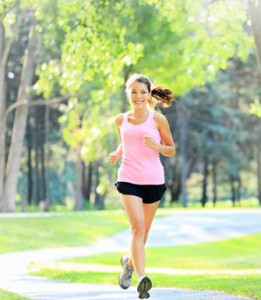 Exercise is beneficial to anyone wishing to live a strong and healthy life, but is particularly important to the person with Parkinson’s disease.

Many studies have been done showing the benefits of exercise, but I believe  it is just at the initial stages of research, particularly with regards to “excessive, high intensity” exercise. Part of the reason for the lack of research is that the sample space was originally older people who probably hadn’t been actively exercising. Therefore, they likely did minimal exercising after diagnosis.  I also believe that we live in a society where we want a pill to take care of our problems and we don’t want to have to take the initiative to be proactive.

The research that has been done has shown several different benefits:

The best way to achieve benefits is to exercise on a consistent basis.

There also seems to be a consensus that the greater the intensity of the workout the greater the benefit. Intense exercise is an activity that raises your heart rate and causes one to breath heavily. Three or four days per week of intense exercising by biking or running for approximately an hour would be beneficial, but other forms of activity could also be used. No matter what activity is involved, it should be under the direction of a doctor.

All of these areas are beneficial to the person with Parkinson’s and all of them should be incorporated into one’s program. Research has shown that exercise before the onset of Parkinson’s is also very important.

Exercise has been shown to be a neuro-protector and act to delay the progression of the disease.

Medication has its place in treating people with Parkinson’s, but medical professionals agree that exercising may be “one of the best and most underutilized ways of combating the condition.” Exercising earlier in life has shown a 30% decrease in the likelihood of getting Parkinson’s.

There are some studies that show that exercising intensely has a protective effect on brain tissue and has been shown to improve on cognitive and muscle control tests. Parkinson’s patients who exercise have also been found to live longer, healthier lives.

I didn’t begin running until the late 1970s, during what has been referred to as the “Running Boom”. It really took a hold of me and changed my life in many ways. For almost twenty years I was a pretty serious, competitive runner, during which time I ran over 30,000 miles and competed in 25 marathons.

My personal best in the marathon was just under three hours. In the late 1990s I started to notice certain physical changes, particularly in terms of gait and stiffness of movement, and balance issues. In 1999 I ran a marathon in just under five hours. I knew I needed to seek professional help. In 2002, I was diagnosed with Parkinson’s disease.

I decided to stop running marathons but did keep running regularly. In 2009 I decided to start running marathons again to raise funds and awareness of the Michael J. Fox Foundation for Parkinson’s Research. I continued to run these marathons until November 2013 when I ran the New York City Marathon in just under 8 hours (7:57). Running and exercise will always be part of my lifestyle.

I credit the fact that I ran before my diagnosis and continued to run afterwards for the delayed progression and severity of the disease.

All the studies lean towards the use of exercise as a major prescription for those with Parkinson’s:

If one were to do an internet search on “running a marathon with Parkinson’s disease”, you wouldn’t find much information. The sample space for research is not that large. There are not many marathon runners in the world who have Parkinson’s. I believe that much more research into “extreme” exercise (exercising 5 – 10 hours a week) and its effect on Parkinson’s disease is needed.

I also believe that it won’t make much of a difference. If a study came out today that running a marathon would reduce or eliminate Parkinson’s symptoms, one wouldn’t see a rush to sign up. We live in a society where we want our scientists to find out the chemical changes that take place in the brain while training for and running a marathon, put it in pill form and then take it to get the results. 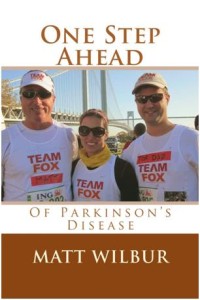 People with Parkinson’s need to become proactive with making their lives all they are capable of being.

I have used my experience with running marathons with Parkinson’s disease, as a platform to speak to thousands of people, about how we can choose to live with Parkinson’s and other “bad” things that may occur in one’s life.

I have written two books.  In One Step Ahead of Parkinson’s Disease, I document my running career with particular emphasis on how my running changed its emphasis after my diagnosis and my marathon experiences in 2009 – 2011.

My second book, It Doesn’t Get Any Better Than This, is a sequel to my first book, covering marathons in 2012 and 2013. These books, as well as my presentations have touched the hears and spirits of many.