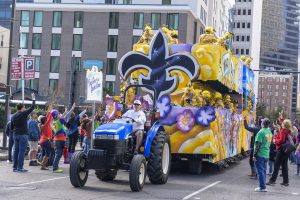 More than 100 years ago, floats began parading along New Orleans’ streets – from the Krewe of Alla to the Krewe of Zulu – as a way to entice business men to establish roots in the city and bring wealth to an area affected by the Civil War. The annual celebration is a carnival full of festivities. Another aim is to bring awareness to social justice issues such as black lives, sexual liberation and female empowerment.

In mere hours, the Krewe de Vieillesse, with a theme of celebrating age pride, can be seen parading along a route from South Clairborne to St. Charles to Chartres – linking Broadmoor, Garden District and Marigny neighborhoods.

Just as the Krewe of Rex names an influential resident involved in multiple civic causes and philanthropic pursuits, so too does the Krewe de Vieillesse honor an older adult whose contributions add vigor and liveliness to the community.

Just imagine if the Krewe de Vieillesse were a real event. How rich would our nation be if were age-friendly? One that honors all members of the community. Where we don’t ask questions such as: “Is aging a disease, or merely a natural occurrence that produces disease-like symptoms?”

Oh goodness. Aging as a disease?

We learn early on in life that diseases and disease like-symptoms are to be feared. By 2050, it is suggested that 16 million Americans will be diagnosed with dementia, a neurodegenerative disease. Put differently, 60-70% of us will not be affected by dementia.

A pervasive, traditional and customary approach to old age raises questions within the context of a medical model. Old age is seen as something that needs to be cured. Fix it.

I wonder if in the United States’ nearly 4 million total square miles, there is space for alternative constructs of old age?

Similar to one view promoted by physicists James Jeans and Sir Arthur Eddington, thinking the universe to be best understood as a great idea, we can think of old age as a great idea.

The process of aging exists to be interacted with. Ideas of old age are incomplete. As we age, we get to inform the structure and meaning of old age. Our identity adds a uniqueness to what it means to be old.

Maybe there is even space within the idea of old age for self-respect to coexist.

In 1961, Joan Didion wrote about self-respect in Vogue. She suggests, “self-respect has nothing to do with the approval of others—who are, after all, deceived easily enough.” Despite living in a nation that barely hears the edges of words spoken by some old people, I hope we can continue formulating other ideas of what it means to be old – for ourselves and others. 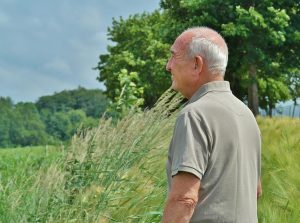 Our orientation to the world, one that directly informs our own and others’ identity, could shift away from a diseased medical model and toward a mindfulness-based construct of old age.

If we adopt a mindful approach to aging – one that conceives of the possibility of new categories, a constant recreating or reorganizing of information that defines and interprets our understanding of our worlds, our own and others – perhaps our fears will decrease, and love will increase.

We could be living in harmony with old age. As Thibodaux writer June Shaw said in Nora 102 ½: A Lesson on Aging Well, “her vision decreased, [and] her joie de vivre remained.”

Placing old age within a different frame – one of revelry, rite, and ritual –  we might then view 79 to 80 as a rite of passage. There could be specific rituals reserved for people ages 82-84. And there could be grand revelry at 91. With all this pomp and circumstance to tantalize us in our youth, we might even stop living in fear of being old. We might also stop being afraid of people who are old.

Just as flambeaux carriers shined light on the complex creations of original floats during carnival, let us now illuminate older adults in a celebration of inclusion and appreciation. Thank you for adding to our world.

Adrienne Ione is a dynamic, mindful, high-fiving, cognitive behavioral therapist, certified dementia specialist and senior personal trainer. Founder of Silver Linings Integrative Health, a company with an aim of promoting health, fitness and wellbeing opportunities for people to thrive across the lifespan.