Parkinson’s Disease is a degenerative condition causing tremor and motor impairment.  Though PD is not fatal, complications from the disorder can be severe and there is no known cure. Parkinson’s has been related to the loss of dopamine (a hormone) secreting neurons in the midbrain area called the substantia nigra.  With a decrease in the production of dopamine, the ability to  regulate the body, movements and emotions are lost.  Symptoms and intensity  can vary from person to person.  Western  physician, Galen gave a description of the conditions in 175 AD.  He called it  “Shaking Palsy”.  In 1817, physician James Parkinson published a very detailed description and so, the disease was named after him. 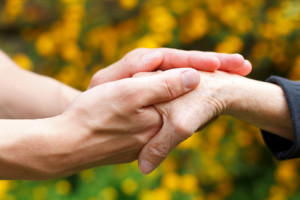 One winter In the early 1970’s, I remember my grandfather coming home from his job as a School Crossing Guard.  He said he slipped on a sheet of ice. It was then that I first heard the term Parkinson’s disease. It had a face, it was the new face of my grandfather (before the Muhammad Ali and Michael J. Fox diagnoses).  My grandfather did not ever return to work after that particular fall.  What followed were many visits to the doctor’s office, drastic physical changes in his appearance and behavior.  It was not only challenging for my grandfather, but for our family and friends to adjust to the strange new way his body would move or not be able to move. He developed the stooping postures and fixed emotion-less look on his face.

Over time he began to have difficulty speaking, swallowing and chewing.

Pop Pop’s symptoms became more pronounced.  It was not uncommon to witness the classic tremor rapidly becoming more intense and uncontrollable.  It was routine to assist him in rising from seated positions and physically move his legs to assist him in walking.  His muscles became more rigid and his speech more difficult to understand.  It became harder for him to perform normal daily activities. The falls got closer together and the damage to his body became more severe with each new fall.  I remember clearly the fall he took that changed the direction of my career goals.

Twenty years after my grandfather’s passing, more than 60,000 cases of Parkinson’s are diagnosed in the United States annually.  It is estimated that 1 in every 500 people around the world are living with Parkinson’s disease. The number could actually be higher if you consider the unreported or misdiagnosed cases. Typically, diagnosis is based on a neurological exam and medical history. Males are 50% more likely to develop the disorder than females.

In Western medicine, Levodopa is the primary prescription for Parkinson’s disease. Unfortunately, many of the side effects mimic the symptoms of the disease itself. Constipation, urinary problems, skin disorders, sleep disturbances and depression are some of the common symptoms.  As mentioned earlier, there is no known cure for PD. However, there are some alternative medical treatments that can help support someone who has Parkinson’s with potentially less side effects.

One such school of medicine is called Ayur Veda, a 5000 year old system. It is still the primary form of medicine practiced in India. Ayur Veda promotes a disciplined life style that is supported by nature. The focus is on treating the whole person not the disorder.  Rising early (before 10 am each day) daily self massage, yoga, a daily walk (with the rising sun is very therapeutic), meditation, healthy foods (preferably organic), good eating habits and proper rest are a few of the natural recommendations that, according to Ayur Veda principles, will pacify the “Kampavata”. “Kampa” means shaking and ‘vata’ is one of the three bio-humors that make up our body.  Ayurvedic practitioners will also describe other natural approaches to the treatment of Parkinson’s.

I first learned about AyurVeda as a massage student in 2005.  Considered the third largest medical system according to the U.N. World Health Organization, Ayur Veda is said to be the original mind/body medicine.  Ayur=life and Veda=knowledge, a compound Sanskrit word which commonly translates to “the science of (long) life.