Beginning in the seventh grade, I became fascinated with age—specifically how our bodies’ functional capacities decrease with the passage of time. When I once shared this perception with my 98-year-old grandmother, she said, “Just wait until you’re 80.” I’m still far from 80, so I can only imagine how difficult it will be then to stand up from a chair or run around the neighborhood.

The biggest factor in the decline in physical capacity with age is level of physical activity. When your clients remain active throughout adulthood, they can retard the aging process and continue to live a life worth living. I know 70-year-olds who are fitter than 30-year-olds. 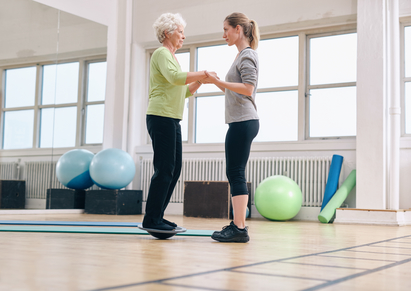 Physiology of the Older Adult

After age 30, most physiological functions decline at a rate of approximately 0.75 to 1 percent per year. Perhaps the biggest functionally-related physiological change with age is a decrease in muscle mass, called sarcopenia, which is due to a loss of motor units (a motor neuron and all the muscle fibres it connects to) and atrophy of fast-twitch muscle fibres. With the loss of motor units comes denervation of muscle fibres (a lost connection between the motor neuron and the fibres within the motor unit). This denervation causes the muscle fibres to deteriorate, resulting in a decrease in muscle mass, which significantly decreases the older adult’s muscle strength and power, making certain activities of daily living difficult.

Men and women generally attain their highest strength levels between ages 20 and 40, after which the strength of most muscle groups declines, slowly at first and then more rapidly after age 50. Muscle strength decreases approximately eight percent per decade after age 45, with greater strength losses occurring in women compared to men. In both men and women, lower body strength declines more rapidly than upper body strength.

With the loss of muscle mass also comes a loss in mitochondria, which decreases muscular and aerobic endurance. Mitochondria are unique in that they have their own specific DNA, so when older adults lose mitochondria, they also lose mitochondrial DNA. If your clients want healthy functioning muscles as they age, they need lots of healthy mitochondria.

Cardiovascular fitness also declines with age, in part due to a decrease in maximum heart rate and stroke volume (the volume of blood the heart pumps per beat). With a lower maximum heart rate and stroke volume comes a lower maximum cardiac output (the volume of blood the heart pumps per minute), a decreased ability to deliver oxygen to the muscles, and thus a lower VO2max (the maximum volume of oxygen the muscles can consume). VO2max decreases by 8 to 10 percent every 10 years after the age of 30 in healthy, sedentary adults. When maximum cardiovascular functioning declines, so does the workload that can be tolerated at a given percentage of the (lower) maximum. Decreases in VO2max with aging can be variable, particularly if your clients remain active. But if not attended to, a youthful run becomes an aged walk.

Although many physiological factors decline with age, up to 50 percent of this decline is due to deconditioning rather than aging. With proper training, your clients can lessen the physiological effects of aging and remain fit and functional. 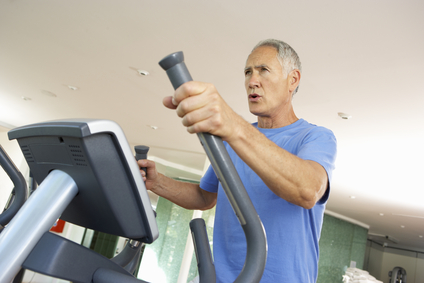 Arguably, cardiovascular exercise will always be more important than strength training throughout your client’s life because heart disease is the most common cause of death for both men and women. No one has ever died of a weak biceps muscle. But people die of weak hearts every day. One cannot live very well or very long without a strong heart. Since the risk of heart disease increases as people age, older adults need cardiovascular exercise just as much or even more than do younger adults. Like younger adults, older adults should do at least 30 minutes of cardiovascular exercise on most, if not all, days of the week. The more physically fit one remains, the slower the rate of cardiovascular decline. Maintaining exercise intensity, rather than a higher volume of training, is the key to minimizing the loss of aerobic fitness as your clients age.

Strength training also becomes more important as people age. Given that aging is accompanied by a decrease in muscular endurance, strength, and power, resistance training should take on greater weight (pun intended) when training an older client. I’d even go as far to say that every person over the age of fifty should strength train because that’s about the age at which people start to lose a significant amount of muscle mass. And that loss in muscle mass with age affects your client’s ability to function. If you’ve ever seen a senior citizen try to stand up from sitting in a chair or witnessed how catastrophic a fall can be to a senior, you know how much benefit strength training can have. The positive effects of strength training on bone density, muscular strength and endurance, balance and coordination (which reduces the risk of falling and fractures), functional mobility, physical aesthetics, and self-esteem cannot be denied.

Train older clients with heavier weights and fewer reps per set to target improvements in muscular strength, or with lighter weights lifted quickly to target the fast-twitch muscle fibres and improvements in muscular power. Greater strength gains occur at intensities of 80 to 90 percent of the one-rep max (the maximum weight that can be lifted just once). Although we tend to think of power training as something done to improve athletic performance, it has big implications for older adults, whose muscles lack strength and power. Research has shown power training to be very effective for strength and power development in seniors. Since it takes longer to recover from workouts as people age, give your clients more time between intense resistance and cardio workouts.

If you train older adults with higher intensity, less volume, and more recovery between workouts, not only will they be fitter and stronger, they may even be able to keep up with my 98-year-old grandmother.

Jason Karp, PhD, is the 2011 IDEA Personal Trainer of the Year, 2014 recipient of the President’s Council on Fitness, Sports & Nutrition Community Leadership award, and creator of the REVO₂LUTION RUNNING™ certification. He has more than 400 published articles in international running, coaching, and fitness magazines, is the author of eight books, including Run Your Fat Off and The Inner Runner, and speaks at fitness conferences and coaching clinics around the world. Get training programs and autographed copies of his books at run-fit.com.