Many people are aware of the devastating effects dementia and Alzheimer’s disease (AD) has on families. I know this devastation personally, as my mother suffers from advanced stages of AD. It is very sad to have only the body present of someone you have known and loved your whole life! This article will discuss some of the newer developments in understanding and possibly reducing the disease, as well as the positive role exercise may have in slowing the onset and development of symptoms, and disabilities for any form of dementia.

The impact on family units and caretakers is even greater and can’t be measured by financial impact. Dementia is a group of symptoms that affect mental tasks like memory and reasoning. Dementia can be caused by a variety of conditions, the most common of which is Alzheimer’s disease. Alzheimer’s disease accounts for 60 to 80 percent of dementia cases (http://www.alz.org). Much of the recent attention to professional football players and the repeated brain trauma is due to the increased incidence of dementia, not Alzheimer’s. Dementia is characterized by loss of memory, intellectual capabilities and executive functions. 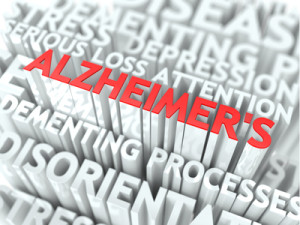 According to the Alzheimer’s Association, in 2015, 5.3 million Americans are believed to have this incurable disease. The cost of Alzheimer’s to the U.S. is $226 billion, and this figure is estimated to more than quadruple to $1.1 trillion by 2050 unless some major discoveries are made. It is the 6th leading cause of death behind heart disease, strokes, and cancer but it is the only one that cannot be prevented. One in three seniors will die with some form of dementia. Alzheimer’s is far more prevalent in women, with about 3.2 of the 5.1 million people, or 2/3rds, being women. The Baby boomer generation should cause the number of those affected to swell to 7 million, which may double by 2050. (http://www.alz.org/facts/overview.asp).

While no one really knows exactly what causes Alzheimer’s disease (AD), there are several factors that are highly associated with it, and even some treatments that seem to slow its progression and onset. The two most prominent factors associated with AD are age and family history.

After age 65, the risk of Alzheimer’s doubles every five years. After age 85, the risk reaches nearly 50 percent. A type of AD is known as early onset or younger onset. This term actually is used for two types, a risk and deterministic form. Both may start in someone’s 30s or 40s and if someone has the gene it is 100%. This “determined” form is rare, accounting for only 5% of the total cases. Research has shown that those who have a parent, brother, sister or child with Alzheimer’s are more likely to develop the disease. The risk increases if more than one family member has the illness.

When diseases tend to run in families, either heredity (genetics) or environmental factors, or both, may play a role. There are two categories of genes influencing a person developing a disease: risk genes and deterministic genes, both of which are present in Alzheimer’s disease.

Risk genes increase the likelihood of developing a disease, but do not guarantee it will happen. Researchers have found several genes that increase the risk of Alzheimer’s.  Apolipoprotein (APOE)-e4 is the first risk gene identified, and has the strongest impact on disease risk. APOE-e4 is one of three common forms of the APOE gene; the others are APOE-e2 and APOE-e3.

Those who inherit one copy of APOE-e4 have an increased risk of developing Alzheimer’s and those with two copies have an even higher risk, but still not a certainty. In addition to raising risk, APOE-e4 may tend to make symptoms appear at a younger age than usual (early onset). Scientists estimate that APOE-e4 is implicated in about 20 to 25% of Alzheimer’s cases.

We often associate brain size with cognitive capacities and for the most part this relationship holds true. While it is very difficult to measure any increase in mass due to neuroplasticity, we can measure increase activity in the brain due to exercise, or decreased activity from AD and other dementias.

How can Exercise and Diet Help 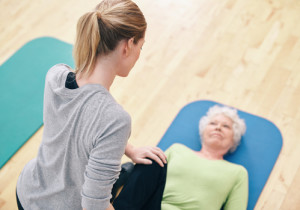 It is important to understand some of the limitations of exercise and diet in helping either dementia or AD. First of all, one must separate non-Alzheimer’s dementia from Alzheimer’s, and then must understand what stage of AD the individual is in. Finally, one must realize if the symptoms have already manifested (onset), and then monitoring the progression.

Exercise has a more pronounced effect on helping decrease progression and even reversing some symptoms with non-Alzheimer’s dementia.  In addition, the earlier someone is able to perform preventative actions, the greater the effect those therapeutic actions will have. Exercises that really activate the brain such as dance, yoga, and new sports or techniques are the best for prevention.

By exercising regularly throughout your life you will lower your incidence of getting Alzheimer’s by 50% and by doing mental exercises with the physical exercises may lower your chances by 70%! This reduction would not apply to those with deterministic genes but it would for others.  Some researchers believe exercise can both delay onset and reduce symptom severity no matter what the cause.

Aerobic exercise in particular causes a release of brain derived neurotropic factor, which has been labeled as “Miracle Gro for the Brain” by the author of SPARK, John Ratey, M.D. In addition, aerobic exercise causes some angiogenesis or the development of additional circulation to the brain. When the brain cells receive more blood, they get more oxygen, and thus function better.

Other side benefits of exercise are the muscle strengthening and enhanced balance and activation of postural muscles. Many Alzheimer’s patients will be at risk for falls and disturbed gait patterns. A consistent exercise program can delay and slow these issues even in somewhat advanced stages.

The dosage is the same as that for the general public or 150 minutes of moderate activity a week. It is important not to push an Alzheimer’s patient into exercise. Many AD victims can become agitated quite quickly and the stress is unwarranted. Simply walking is the best exercise. Make sure the walking path is smooth and not filled with obstructions or difficult terrain.

In an article from Science News, “Walking slows progression of Alzheimer’s”, Cyrus Raji, Ph.D., from the Department of Radiology at the University of Pittsburgh in Pennsylvania, mentions, “We found that walking five miles per week protects the brain structure over 10 years in people with Alzheimer’s and MCI, especially in areas of the brain’s key memory and learning centers. We also found that these people had a slower decline in memory loss over five years.

The type and magnitude of exercise needs to be carefully monitored with advancing Alzheimer’s or dementia but in those with mild cognitive impairment, a “healthy dose” of both resistance and aerobic exercise is advocated.