Exercise and Sleep: Use Your Workout to Stave Off Insomnia 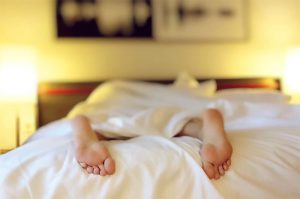 Like sleep, exercise is a free, relatively easy-to-access fountain of youth—especially for those of us who are more or less able-bodied. If you are one of between between 50 and 70 million American adults who chronically suffer from a sleep disorder, take heart. Among the many tricks that add up to a healthy sleep hygiene, you can harness the power of exercise and find that as a result you are getting more rest at night.

It is important, however, to realize that the relationship between exercise and sleep is not as simple as the formula that says more exercise always leads to more sleep. The effect of exercise on sleep can vary from person to person and depend on the time of day, length of time from workout to bedtime, intensity of exercise, the type of workout (cardio vs. strength-training vs. yoga), food and drink consumed, and fitness level. And sometimes we have to deal with other exercise-related complications: If you, say, have the misfortunate of incurring a back injury from exercise, factors like the kind of mattress you sleep on suddenly matter a great deal.

All these variables notwithstanding, it is generally true that a physically active life tends to lead to getting more and deeper sleep on a regular basis. A meta-study back in the 90s found that for the general population, exercise improves the metrics of sleep quality. The length of deep sleep, amount of REM sleep, and total sleep time all tend to increase with exercise. And, at the same time, sleep onset latency (how long it takes to fall asleep) and sleep fragmentation (middle-of-the night wake-ups) tend to decrease. A study published in the journal Sleep found that increasing physical and social activities among older adults resulted in more of the higher-quality slow-wave sleep and showed improvement in memory-oriented tasks.

But, according to a study of sleep habits of adults in their 60s published in The Journal of Clinical Sleep Medicine, effects of daily exercise on sleep habits might be more complicated than expected. Additionally, in the short run, sleep might have more influence on exercise than vice versa. One surprising thing that was clear is that if you sleep well tonight, you are more likely to get beneficial exercise tomorrow. The reverse causal relationship in the short run is not as clear. The study participants’ insomnia improved as a result of a moderate endurance exercise program that amounted to three or four 30-minute workouts a week—but only after four months. That’s when exercisers saw the benefit of sleeping more deeply and, on average, 45 minutes longer than before. One lesson, then, is that it’s worth it to keep at it with workouts for a few months in order to see a steady and lasting effect on sleep.

Too much exercise can, however, lead to sleep disturbances. Ultrarunners and triathletes can sometimes run into this problem. For one, running attracts the more active, type-A personalities who tend to get off on the runner’s high.

“I think with the general population, vigorous exercise leads to reports of better sleep quality,” says Amy Bender, a Calgary-based researcher at the Canadian Sleep Society who helps Team Canada Olympians fall asleep. But she notes that in case of elite athletes whose workout routines are extra intense, too much exercise leads to troubles sleeping. According to a study published by Medicine and Science in Sports and Exercise, insomnia is one of the symptoms of the overtraining syndrome. Most of Americans, though, are at risk for what might be called … the undertraining syndrome?

Another area of conflicting information when it comes to exercise and sleep is the timing of workouts. Some respected medical resources recommend keeping your workout away from bedtime. The National Institutes of Health, for example, recommends not exercising two or three hours prior to bedtime. The idea is that vigorous exercise, especially of the aerobic sort, can be too rousing and the resulting adrenaline spike does not promote sleep. Harvard University sleep experts, too, caution that “exercise stimulates the body to secrete the stress hormone cortisol, which helps activate the alerting mechanism in the brain.” As a result, they recommend planning to be done with workouts three hours prior to bedtime.

However, a poll conducted in 2013 by the National Sleep foundation found that people who exercise in the few hours before bedtime report sleeping just as well as those exercising earlier in the day. 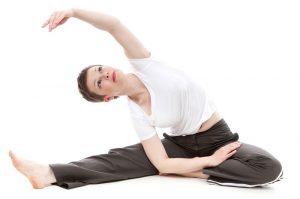 “The timing of exercise ought to be driven by when the pool’s lap lane is open or when your tennis partner is available or when you have time to get away from work, not by some statement that has never been validated,” says Barbara Phillips, a University of Kentucky sleep medicine specialist who was one of the researchers working on the poll.

Our solution? Since we each know our bodies best, we can pay attention to whether or not exercising late in the day has effect on our sleep. If need be, tweak the time of exercise. If you find that exercising too close to bedtime winds you up, try saving the more quieting yoga or the more drowsiness-inducing strength workouts for the evenings and do aerobic exercise farther away from bedtime.

So long as you keep these tips in mind, along with the basic sleep hygiene guidelines, you are well positioned to draw from the two fountains of youth.

Agnes Green is a researcher for the sleep research community Tuck Sleep. She holds two master’s degrees in the social sciences from the University of Chicago and Northwestern University. She sleeps most soundly after a kettlebell workout done three hours prior to bedtime, on a medium-firm mattress, to the sound of a drizzle wafting in through a cracked window in Portland, Oregon.