Rebuilding and Regenerating Damaged Knees: The Future Has Arrived!

If you grew up in the 1970s, you may remember the Six Million Dollar Man TV show with Steve Austin. The show began with a futuristic-type regeneration of an injured Steve Austin, and they would say, “we have the technology, we can rebuild him.” It was a great one-liner, but seem so far-fetched. Fast forward 30 years, or just one generation. The future is now. We have the technology!

We are now routinely seeing regenerative technologies emerge in a wide variety of medical and surgical specialties. Orthopedic surgery, the treatment and prevention of muscle, bone and joint ailments, is certainly on the regeneration cutting edge. 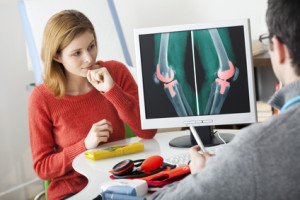 The knee is one of the largest joints in the human body. When healthy, it performs remarkably. The main part of the knee is basically a hinge joint involving the femur (thigh bone) and the tibia (shin bone). There is another articulation in the knee which involves the kneecap and is called the patellofemoral joint. Each joint surface has a cushion of articular cartilage. When normal, the surfaces glide smoothly on each other with a coefficient of friction better than ice gliding on ice. When damaged however, the cushion can have focal “potholes,” areas of damage called chondral defects, or it can have areas of wear and thinning of the cushion, which is arthritis. Damaged cushions not only cause inflammation in the joint, but can grind on each other and because of a lack of shock absorption result in significant pressure and pain in the adjacent bones. Years ago, when I was in my training to become an orthopedic surgeon, I did research trying to regenerate and repair damaged joint cushions. Back then, the dictum was that once damaged, joint surfaces can never heal, and over time will continue to deteriorate leading to further damage and ultimately arthritis. Even today we know that joint cushions have very limited healing capacity, as they have no blood supply and no nerve endings (both needed for areas of the body to initiate, and complete, healing when injured or damaged). So basically, once a joint cushion was damaged, you were doomed.

In recent years, technology has exploded allowing for regeneration of damaged joint cushions. I cover this in great detail in my book FrameWork for the Knee. Thanks to orthopedic basic science researchers and some visionary clinicians, we have really come a long way in understanding the biology of joint cushions, both normal and diseased or injured. This has opened the door for the development of interventions that hope to positively alter the course of many knee ailments.

We can now refill “potholes” (and thus fix chondral defects). Someday we will be able to “repave the road” restoring larger areas of more diffuse joint cushion damage, and that means potentially curing arthritis.

Dr. Richard Steadman, pioneered knee cushion regenerative techniques with his microfracture procedure in which small microfracture puncture-type holes are carefully placed in the bony base area of chondral defects (“potholes”) in the knee. This forms a blood clot (remember, the articular cartilage does not have a blood supply, but the underlying bone does!). The clot has specialized cells and growth factors which, if the proper post-operative program (and this is the critical part) is followed, can over time regenerate a new joint cushion! The sports pages these days are filled with successful stories of many professional and high level athletes getting microfracture surgery and being able to get back in the game. I routinely perform microfracture procedures and also have been amazed at the results — often allowing patients to be active, pain-free and happy for many years, something I would have deemed impossible years back in my training.

Since Dr. Steadman’s pioneering work, other regenerative cell techniques have emerged, and they are even being used in other joints. In Sweden, Dr. Lars Peterson developed autologous chondrocyte implantation (ACI). With ACI, we can take samples (a small biopsy approximately the size of a TicTac) of your healthy knee cushion cells (called chondrocytes), re-grow them in the laboratory, and then, in a second surgery, transplant those cells back into your knee to restore larger areas of damage. This is a more involved surgery than microfracture but may give a more durable repair tissue that will hold up better over time. I have performed many ACI surgeries and have been very pleased with the results. One such case involves a wonderful dancer who, following her regenerative surgery to restore a large, deep area of damage, was able to get her dance career back on track. Other newer cell therapy options to repair focal areas of damage include the DeNovo NT Natural Tissue Graft, in which cartilage cells are obtained from healthy young donor tissue and those chondrocytes can be surgically placed directly into knee cushion defects and sealed in with a biologic protein-based glue. With all of these techniques, the post-operative rehabilitation is so critically important, and if not followed, results will be sub-optimal. It’s a very lengthy, and not always predictable, process trying to re-grow joint surfaces. I do believe the future will bring ways to accelerate the process for quicker recoveries and down time.

And cell therapies have even gone beyond surgery to office-based injections only. Many researchers and physicians, instead of performing surgery, are injecting stem cells and growth factors, including PRP (Platelet-Rich Plasma) into the knee. These injection based cell therapies are a hotbed area of research. Early scientific studies have been very promising in terms of helping arthritis symptoms, but the injection alone will not yet rebuild or restore significant areas of joint cushion damage. As there are many variations, with different cell types and concentrations, more research is needed to not only know what works or doesn’t work, but also what works best. The cell therapies are now also being used experimentally in conjunction with regenerative surgeries to enhance, and possibly accelerate the healing process.

One major challenge, holding up the explosion of these innovative technologies in the USA, is our FDA. These regenerative surgeries can be much less invasive for patients if the cells and growth factors could be grown on a biologic scaffold. Think of a scaffold as a small biologic sponge that is soaked with cells or growth factors. The cell enriched scaffold would be much easier to implant (rather than dealing with liquid cells alone) and can be cut like a postage stamp to fit the defects or areas of damage. Cell-scaffold composites are currently available in other countries. Matrix induced autologous chondrocyte implantation (MACI) is one of those cell/scaffold techniques that can be done (not in the USA) with minimal incision or even via arthroscopy assisted techniques, with quicker recovery time for patients. Knee surgeons like myself, with great interest in regenerative cell-based procedures, have been very disappointed by our FDA’s slow approval response to these safe, proven techniques that potentially could help so many individuals. We currently can use cells, and we can use scaffolds, but we can’t yet use them together in the USA. 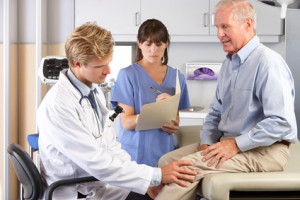 As a knee surgeon, I am constantly amazed at the new technologies and associated research geared not only toward repairing or patching up damaged joints, but actually regenerating new cushions. Knee problems are on the rise. One in five adults suffer with knee pain, and total knee replacement surgery is one of the most commonly performed surgeries in our nation, with exponential increases predicted in the upcoming decade or two. According to the Arthritis Foundation, osteoarthritis of the knee affects almost 30 million individuals. We are also seeing worn knees in younger and younger patients.

Regeneration technologies could make knee replacement a thing of the past. I foresee the day, in the not so distant future, when we either inject specialized cells, or apply a mixture of cells and growth factors, almost like Spackle, to injured joint surfaces in the areas of early arthritis, and not only halt future damage, but also make knee arthritis a thing of the past. But until then, it behooves us to take care of our knees and preserve what we have, with a focus on prevention. Keep your weight down, and your legs and core strong. If you are having knee problems get things checked out sooner rather than later. And if there are issues like arthritis, be willing to modify your activities and fitness programs to protect your knees. You must however find ways to remain active and fit, as being sedentary is not an option.

So for now, “we (almost) have the technology, we can (hopefully soon) rebuild him… or her.” The future is indeed very bright!

Originally published on the Huffington Post. Reprinted with permission from Dr. DiNubile.