The Benefits of Adding Tai Chi to Your Exercise Regimen

“Tai Chi is better than a glass of wine!”

The above quote is an actual proclamation from one of my students at the end of class one night. Let’s take some time to look through all the things that you can expect from learning this relaxing, slow martial art.

Because Tai Chi offers a slow, meditative approach to movement, some people question it as an exercise modality since the aerobic component is not high. You should not dismiss it, however, simply because you might not break a sweat doing it! The intensity of this form of exercise can be increased or decreased depending on the depth of the postures and the duration of practice.  It is certainly a low-impact form of exercise which is beneficial to people with existing joint issues and to people who want to avoid joint issues.

Let’s take a look at both the scientifically proven benefits and the anecdotal benefits that occur with the regular practice of Tai Chi. 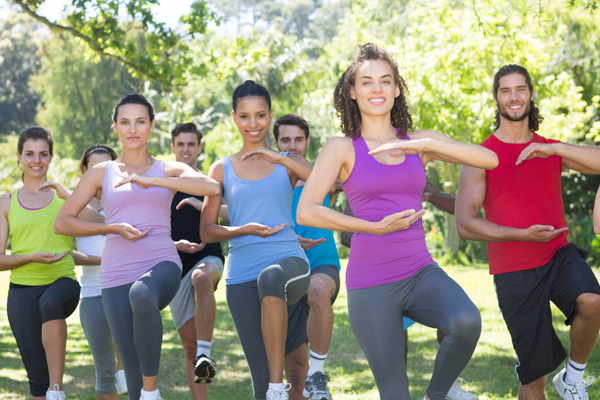 As you would expect, there are many physical benefits when one practices any form of exercise over a period of time.  The benefits that research has proven with the regular practice of Tai Chi are surprisingly far-reaching, especially in our current climate of anti-aging remedies.  The Mayo Clinic lists some of the benefits of Tai Chi as:

That list is impressive just by itself!  There are other studies that have proven improvement for those who live with chronic conditions such as fibromyalgia, Parkinson’s disease, osteoarthritis, COPD and others.  It has also been proven to improve bone mineral density in elderly women. One study (Tai Chi Chuan: an ancient wisdom on exercise and health promotion) even stated that, “The long-term practice of Tai Chi Chuan can attenuate the age decline in physical function . . . .”  It’s no secret that we are living longer now due in part to medical advances.  It can be argued that we are not necessarily living better, however.  The practice of Tai Chi can possibly be one of the ways we are able to increase the enjoyment of our later years because of the improvements it provides in physical function.

One of the biggest concerns of aging is falling.  Obviously, the physical detriment of broken bones or concussions or even just severe bruising are difficult for the aging population to deal with.  The mental effect of being scared it will happen again is even worse, however.  There are many studies that show a rapid decline in independence after just one fall.  Clearly, working on balance is an important concept to help prevent falls.  In a meta-study, authors Wong and Lan wrote in “Tai Chi and Balance Control” that, “recent studies substantiate that Tai Chi is effective in balance function enhancement and falls prevention.”  They also concluded that, “Tai Chi improves static and dynamic balance, especially in more challenging sensory perturbed condition.”  A different study on the effect of 4-and 8-week intensive Tai Chi training on balance control in the elderly concluded that, “even 4 weeks of intensive Tai Chi training are sufficient to improve balance control.”  Anecdotally, I have witnessed this in the classes I teach.  Many of my students comment on the marked improvement in their balance.  One student in particular related the story of how she and her husband were hiking and she was getting frustrated because she felt unstable going over the rocks.  Then she remembered her Tai Chi training and started to incorporate some of the principles of columns and weight shift, and she immediately felt more balanced and in control on their hike!

One of the other anecdotal effects that I have seen in my classes is weight loss with Tai Chi.  It is not something that people express as a goal when they start Tai Chi, however, I have had several students who have admitted that beneficial weight loss has been a side effect of their training.

The benefits of Tai Chi are not only substantiated as physical benefits.  There are important mental and emotional benefits as well.  Let’s return to the list of benefits from the Mayo Clinic. They also list the following as resulting from practicing Tai Chi:

And I would add the following to that list: 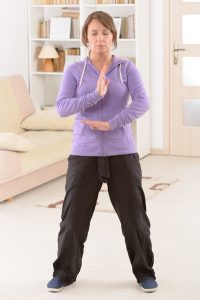 The studies concerned with the effect of Tai Chi on psychological well-being are not as conclusive as the studies on the physical benefits due in part to the obvious reliance on subjective measures.  In general, however, the studies do demonstrate beneficial effects in regard to practicing Tai Chi for depression, anxiety, stress management and mood disturbance.  One study on the therapeutic benefits of Tai Chi exercise (Kuramoto AM) states that, “Tai Chi can influence older individuals’ functioning and well being . . . and the positive effects of Tai Chi may be due solely to its relaxing, meditative aspects.”   Just the other day, I had a student comment to me after class that, “It always seems that whatever I’m dealing with on a particular day just eases back into the proper perspective when I’m done with Tai Chi.  It obviously doesn’t make the problem go away, but it feels like I can approach it with a better mindset and a healthier attitude.”  That’s really the beauty of Tai Chi.  It’s not some mystical, magical force or religion.  In one study that measured heart rate, adrenaline, cortisol and mood during Tai Chi (Jin P), “Relative to baseline levels, subjects reported less tension, depression, anger, fatigue confusion and state-anxiety. They felt more vigorous and in general, they had less total mood disturbance.”  In another meta-analysis regarding Tai Chi exercise and the improvement of health and well-being in older adults (Yau MK), “There is considerable evidence that Tai Chi has positive health benefits; physical, psychosocial and therapeutic.  Furthermore, Tai Chi does not only consist of a physical component, but also sociocultural, meditative components that are believed to contribute to overall well-being.” This same study concluded that, “It is recommended as a strategy to promote successful aging.”  That’s quite an endorsement!  You might say that Tai Chi comes close to being a fountain of youth for those that practice it!

In my own experience, I have seen the improvement in mental focus and working memory.  If you are not “in the moment” and really thinking about your movements and how to apply the principles of Tai Chi . . . you will get lost!  You can’t think about what’s for dinner that night, or the fight that you had with your spouse the night before.  You must focus your mind on the task at hand and that actually causes a relaxation and meditative effect.  Because many of the movements force you to cross the midline, you are also forcing your brain to function in a different pattern by making the left side talk with right side.  Jean Blaydes Madigan, a neurokinesiologist states that, “Crossing the midline integrates brain hemispheres to enable the brain to organize itself. When students perform cross-lateral activities, blood flow is increased in all parts of the brain, making it more alert and energized for stronger, more cohesive learning. Movements that cross the midline unify the cognitive and motor regions of the brain.”  Wow!  You are actually making your brain function better on all levels with the simple practice of Tai Chi!

The last point I want to mention about the benefits of practicing Tai Chi is the most subtle, but certainly a very important point, especially as we age.  I see a community develop in my classes that is so strong, it supports each member and provides a social interaction that is rare in our society. Many studies have shown that for successful aging, people need to be involved and to interact with each other.  My students come to class to enjoy the benefits of Tai Chi . . . but they also come to class to enjoy the social interaction and support from their classmates.  This kind of support and interaction can happen in any number of different venues, of course.  I think the combination of the relaxing atmosphere, a non-intimidating, simple to move kind of exercise and the joint experience of learning something new that has a calming influence on your mood is un-paralleled in the exercise world.  Tai Chi brings together your physical well-being with your mental and social well-being in a unique experience that can be practiced for years. Better than a glass of wine, indeed!

Dianne Bailey has been providing professional weight management and sports conditioning training for individuals since 2002 and opened The Conditioning Classroom, a private personal training studio, in 2006. She earned the prestigious designation of Certified Sports Conditioning Specialist from the National Sports Conditioning Association in 2007. In addition, Dianne is a Certified Tai Chi Instructor (level 1) through the American Tai Chi and Qigong Association and leads the Tai Chi program here at the studio.